by The Kundalini Genie 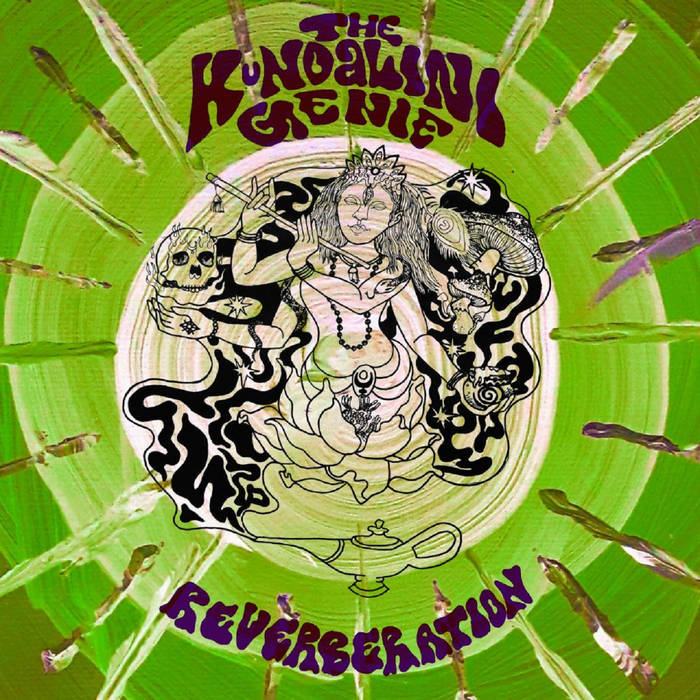 David Currie Sometimes you hear new music and the drum sets your feet tapping or you find yourself strumming your leg in rhythm with the guitar playing. Kundalini Genie on this album make me want to dance around an open fire crying to the gods of music and thanking them for this gift they have bestowed on me as a mere listener. I know that sounds a bit evangelical but that's what Reverberation does to me. Psychedelic rock is trending at present but this is pure class in amongst the ordinary.
(Interesting to hear that Ghost Dance Collective are big supporters of this band as I just discovered them about 3 hrs ago. Cosmic serendipity at work.) Favorite track: Room One.

Jonathan Outstanding psychedelic rock by a band too good to be ignored. Wonderful pop hooks, killer vocals and excellent musicianship combine to make great psychedelia. This band is better than much of the 60's rock groups inspiring it. Simply great. Favorite track: The Soul That Makes Me Yours.

paul rote Man this is tripping ! The flowers 💐 are just falling out of my hair , or beard I should say .
Flower Power people should dig this . Favorite track: Deja Vu-Vu.

lut_math What a masterpiece Favorite track: Inside, Out!.

The first studio album by The Kundalini Genie.

"I listened to some of your tracks and found them to be very interesting, and full of potential. Particularly, I enjoyed the heavy ponderous ones, but the more lyrical pieces also have a great charm. You, sir, are a talent. Continue your good work and success will almost surely follow."
Powell St John - The 13th Floor Elevators, Mother Earth.

The Kundalini Genie are a four-piece psychedelic band from Glasgow, Scotland.
Formed in early 2017 they played their first gig in The Coyote Whiskey Bar in March, as part of the Carlton Live Sessions.
As payment they received a day of recording time, which they used to produce their first rough single, The Soul That Makes Me Yours, in the days after.
Since then they have been spreading their brand of psychedelic rock'n'roll as far and wide as they could, and have supported such bands as Acid Mothers Temple, Spindrift, The Myrrors, Triptides, and performing at the Carlton Psychedelic Festival of 2017.

Spurred on by mounting interest and significant contributions from close friends and family, they set to work to record their debut album.
The intention of the recording was to do something that would be impossible to do live, so that the recordings were a unique experience as to what could be achieved in a four piece set up, such as simultaneous backwards guitar, rhythmic panning, multi-layered harmonies, multi-layered rhythm guitars/bass/vocals etc.

They decided to keep things simple, however as the level of experimentation was taking a form of it's own and leading the band in another direction, a direction which they decided to follow over time and evolve rather than aiming for that from the very start.
The intention of the first album is to be just that, a first album, the band intend to continue to delve into new and more unexplored avenues of recording and music in the future so that the scope of their music follows a wide spectrum of ideas.

With special thanks to:

Mario D'Agostino
Without Mario's contributions this album wouldn't exist nor sound as good as it does. He took the time out of his busy schedule to mix and master these songs for us, and throughout the years has given us more help than we could ever repay, through donating and lending us equipment, helping us record, offering us priceless advice and for inspiring us with his own unique and beautiful music.

Jamie Telford
Jamie recorded and mixed all of the songs in the album, made artistic contributions and gave good advice. He also put up with the unreasonable pace at which we needed to move at to complete this album within the time-frame that we set out for ourselves. It was the cause of much stress for all of us and Jamie bore the weight of most of it, things would have fallen apart quickly had he not been able to keep his cool.

Ghost Dance Collective
(Murray Pettit, Ross Lynchehaun, Alan Bragg, Liam Payne)
The ghosts are one of the best bands in the world. They aren't getting the recognition they deserve just now. They have continually inspired us with their amazing music and close friendship.
GDC's drummer, Murray, is the person playing drums on this entire album and the 12-string you here on a few tracks is Ross'.

Michael Taplin and Carlton Studios
Carlton is my place of work. If I had to work a 9-5 job in a bar again or another line of work of the sort, I'd blow my brains out. Barney took me in and gave me a place I felt comfortable and something I actually enjoy doing with all my heart. He has made us so many connections and friends, got us our first gig. I don't think I have EVER phoned up carlton and Barney hasn't replied to me with "Robbie who? Who's that?"

Bandcamp Daily  your guide to the world of Bandcamp

Featuring interviews with the mighty Hiatus Kaiyote and genre-busting L'Rain.